why use The PWA? what are PWA frameworks? part1

Home » blog » why use The PWA? what are PWA frameworks? part1

if you know what are PWA frameworks; all PWA’s functions are enabled even when the device is offline.PWAs are just web apps that have the look and feel of native apps they are responsive.why use The PWA? They don’t need to be downloaded from an app store. why the PWA? PWAs are safe. They don’t take up much space (unlike many native apps). why use The PWA? they’re free to install on your phone, tablet or desktop.

What is PWA? (Progressive Web Application)

A Progressive Web App is known as an abbreviation PWA is a web application that uses modern web capabilities to deliver an app-like experience to users. These apps meet certain requirements, which are deployed to servers, accessible through URLs, and indexed by search engines.

You can deploy your app as a PWA as well as a Native app. They are intended to work on any platform that uses a standards-compliant browser. PWA’s functionality includes working offline, push notifications, and device hardware access, enabling creating user experiences similar to native applications on mobile devices. There is no requirement for developers or users to install web apps via digital distribution systems like Apple App Store or Google Play.

According to Google Developers, the PWA should have the following characteristics:

Works for every user, regardless of browser choice.

Fits any form factors like desktop, mobile, tablet, or forms yet to emerge.

Feels like an app to the user with app-style interactions and navigation.

Always up-to-date due to the service worker update process.

Served via HTTPS to prevent snooping and ensure content hasn’t been tampered with.

Identifiable as an “application” by manifest.json and service worker registration, and discoverable by search engines.

Ability to use push notifications to maintain engagement with the user.

It provides home screen icons without the use of an App Store.

It can easily be shared via a URL and does not require complex installation.

The rise of progressive web apps is tremendous. A PWA is a web application that feels like a native application to the user. By making your app a PWA, not only do you acquire new users, but you can also retain them for longer.

The first step in building a progressive web app is to choose a core framework. There are many frameworks, and I encourage you to look at the choices, but we use React, for two reasons: 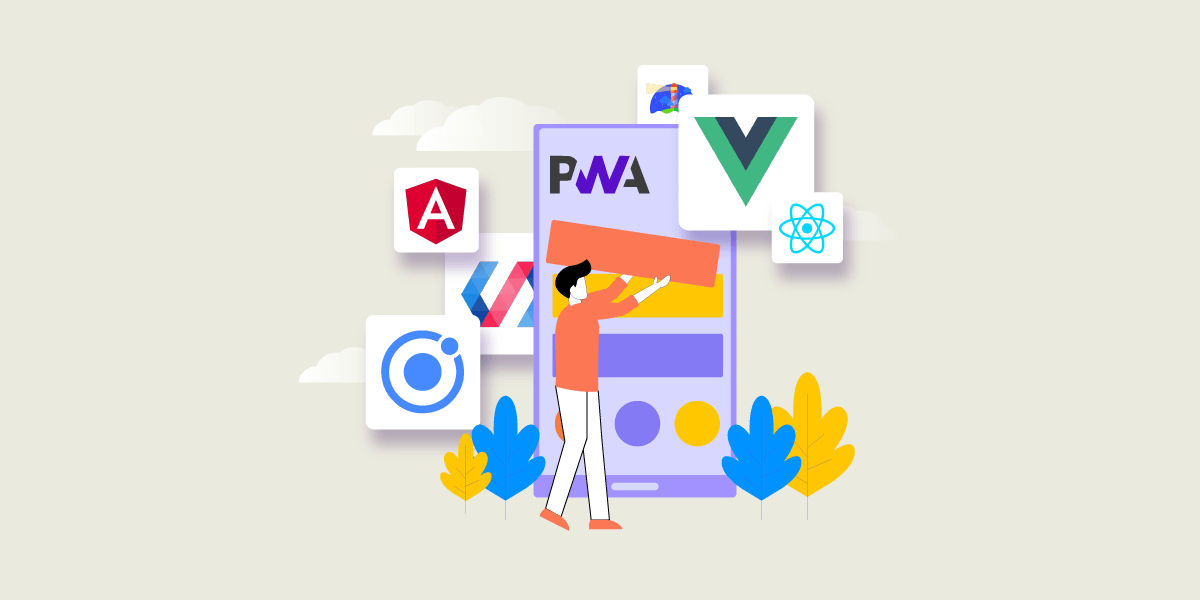 Ionic is one of the most popular frameworks for building a progressive web app. Let’s look at a few reasons why you should choose Ionic as your PWA framework

Google’s Polymer App Toolbox is another contender for the development of PWAs. It is a collection of web components, tools, and templates for building Progressive Web Apps.

Web components can form encapsulated and reusable custom HTML elements. They are independent of the frameworks because they are made of pure HTML/CSS/JS, unlike framework-dependent UI components in React/ Angular. The web components are provided through a light-weight Polymer Library for creating framework-independent, custom components.

Each component whether used separately or together can be used to build a full-featured Progressive web app. Most importantly, each component is additive. For a simple app one only needs the app-layout. As it gets more complicated, developers can add routing, offline caching, and a high-performance server as required.

Angular, probably the most popular front-end web application platform, can also be used to make robust, reliable, and responsive PWAs. Before the release of version 5, supporting progressive web apps in Angular required a lot of expertise on the developers’ part. Version 5 comes equipped with a new version of the Angular Service Worker for built-in PWA support. Angular 6 (released a few times back) has two new CLI commands. Both these versions make it very simple to make web applications downloadable and installable, just like a native mobile application.

With Angular 5 the development of Service Workers is becoming significantly easier. By using Angular CLI developers can choose to add Service Worker functionality by default.

The bottom line is that the frameworks for building progressive web apps are growing and expanding at a rapid rate with regular updates every couple of months. Choosing a particular framework thus doesn’t make much difference to the app behavior. It only depends on the developer’s area of interest and expertise.

Supported by Facebook, React is often one of the top choices of Progressive Web App builders because of its wide JavaScript library and a large community.

Although Pure JavaScript lies in the base of React, it makes use of JSX to employ render functions for connecting HTML structures. This gives developers ease which in return makes React one of the top PWA frameworks and tools.

Developed by Google to improve the quality of web apps, the tool measures your website in multiple criteria and enlists the factors that you have to keep into consideration to ensure your site is ready to become a PWA.

It analyzes your digital offerings and gives you the areas to implement in your PWA development process.

So here were the six frameworks and Progressive Web App tools that have been relied upon by the industry and by our team of in-house PWA builders for converting your idea into an app that merges the best of mobile and web.

Vue is presently one of the fastest evolving libraries because of the ease in coding and high-speed rendering. It allows for scaling of the project with an added advantage of extra packages.

The pros of Vue.js which makes it one of the most reliable frameworks to build PWA includes –

So here were the 6 frameworks and Progressive Web App tools that have been relied upon by the industry and by our team of in-house PWA builders for converting your idea into an app that merges the best of mobile and web.

The popularity graph that the mobile app type is on has given birth to several PWA frameworks and tools that are being prepared to strengthen the debate of Native vs PWA in favor of the latter.

There are several PWA frameworks and tools presently operating in the market. But the ones that we rely on most are:

Working with Digital marketing, SEO services, and website design with a highly experienced team for years, َAvenger IT Next Generation has been able to meet the needs of people in various businesses and help businesses grow. Continuously updating their level of knowledge and exploring different markets has surpassed the pioneers in this field and incorporate successful experiences into their careers.

Add Avenger IT Next Generation to your Homescreen!