What is Google Page Layout Algorithm?

Google first published the” Google Page Layout algorithm ” in 2012. Although several years have passed since this algorithm was published, many users are still asking questions about the algorithm. In this article, we have examined in detail the algorithm and its changes in recent years.

What is Google Page Layout Algorithm?

More attention was paid to the content of the pages and these more advanced SEO factors with the advent of the Panda algorithm in 2011. But on January 19, 2012, Google officially launched the issue by publishing the Page Layout algorithm.

The Page Layout algorithm targeted websites that had a lot of ads at the top of the page. These ads caused the user to scroll a lot to get to the main content of the page.

Google said the algorithm ultimately affected 1% of sites. But that has led them to change the design of the site to provide a better user experience. This update did not include pop-up or sticky ads. In this section, we explain the changes of this algorithm over time.

Google introduced and implemented the Page Layout algorithm. The algorithm, also known as Top Heavy and above the fold, targets sites with high advertising at the top of the page.

Matt Katz, senior manager of the Google Spam Counter Team, said in his Twitter account that the algorithm has been updated, affecting 0.7 percent of English search results. This update was an opportunity for websites that were penalized at the time of publishing this algorithm. Google also removed the penalty sites that had made positive changes to its penalties.

Google has just released a new version of the algorithm. Matt Katz didn’t mention the impact of the update on the websites, but Google seemed to rewrite its algorithm a bit and update its index.

John Muller mentioned this new feature on his Twitter on this date. He told the audience that Google will now automatically penalize fine sites if they correct their bugs and that they do not need to wait for future Google updates. 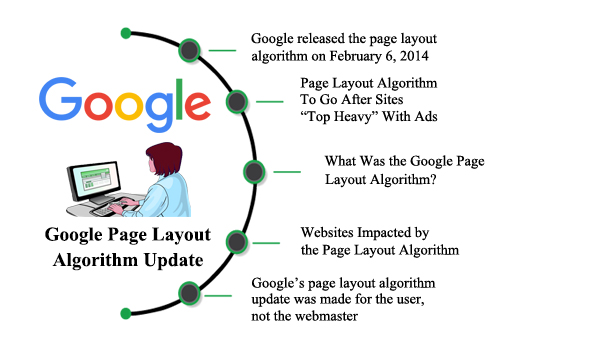 What websites are affected by the Page Layout Algorithm?

With the four updates that this algorithm has had over its lifetime, it is thought to have undergone major changes, but only less than one percent of the world’s websites per update is affected by the algorithm. have taken.

These changes to Google only affected webmasters who were advertising too much at the top. In some ways, this update was also useful to them, as it changed their mindsets about the volume of ads published on the site.

Matt Kates said in more detail that this algorithm does not work for websites whose advertising levels are normal. But it does penalize sites that have loads of ads on top of their page for much of the page load. Sites that find it difficult to find the main content of the page in a heap of ads can also be penalized.

Ad volume management is difficult for many webmasters. For many sites, these are the only sources of revenue for the site. But excessive use of advertising also has consequences, such as fines.

For example, one of the owners of internet forums experienced a 40% reduction in site traffic after the initial release of the Page Layout algorithm. The following photo was posted by the owner of this forum:

Many users also took two years to get out of the penalty after being fined by the algorithm in their first release.

The truth is that users are not interested in getting a large number of ads as soon as they enter a site. They expect to find content relevant to their search query but instead see completely unrelated advertising items.

Get out of the penalty due to the Page Layout algorithm

While only one percent of websites have been penalized by the Page Layout algorithm, your website is still likely to be penalized. So if your site gets penalized by this algorithm we have to do it properly to get it out.

First, note that the amount of screen overlay on the user’s screen depends on the resolution of their monitor. For example, the type of top view in a Mobile is probably different from a laptop. To test the site before removing any element from the top using the Chrome Screen Resolution Tester. The Fold Tester tool is similar in performance.

If you are penalized by this algorithm, you will have to correct the top of the site and wait for the Google robots to be monitored again. The good news is that, as before, there is no need to update the algorithm to get out of Google’s penalty and you just have to wait for Google to re-monitor the site.

Adaptation to algorithms such as Page Layout risks falling into the cycle of constantly changing site design. While the algorithm may seem a bit rigid in appearance, Google admits it gives the user experience a lot of value.

Removing ads from the top of your site pages does not mean reducing your site’s revenue. If we look more closely at the Page Layout algorithm, we find that this algorithm is in line with Google’s planning to prioritize mobile index pages.

Google has warned us through this algorithm that we should reconsider how we offer site ads, including for mobile devices. As the screen size becomes smaller, the user has to scroll multiple times to reach the main content of the page. Without ads at the top of the page, the better user experience will be created for desktop and mobile devices.

The fact of the matter is that Google’s Page Layout algorithm was created for users, not webmasters. This algorithm made websites more selective than advertisers.

The lesson that webmasters learned from this algorithm was to strike a balance between site profitability and user satisfaction. This algorithm has been published for several years, but the lessons we learn from it continue.

Google’s most recent search algorithm update – dubbed the “page layout” algorithm change – focuses to punish websites whose content is pushed below-the-fold by multiple advertisements. While the forecasted number of searches affected is less than 1%, it’s never a bad idea to use an algorithm update as an opportunity to take a step back and examine your site’s search engine friendliness and usability. It is not an occasion to panic, however. Chances are that your site complies with the updated page layout standard. If it doesn’t, it would be hard for me to believe that this change is anything but a blessing in disguise.